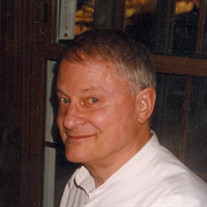 Anderson - Warren Cottrell “Pete” Moffett, 89, of Anderson, died peacefully following a short illness at Community Hospital on Friday, January 22, 2021. Pete was born to Gundrieda (Cottrell) and Donald R. Moffett on May 10, 1931, in Worcester, Mass., and lived his formative years in Bronxville, New York. He was a 1953 graduate of Wabash College, where he was a member of the Delta Tau Delta fraternity. After graduation, Pete served as a lieutenant in the Coast Guard and was stationed in Key West, FL, from 1953 -1956. Pete retired as a sales engineer with Delco Remy in 1986. He was a member of the Madison County Chamber of Commerce and formerly served on the Board of Directors for the Visiting Nurses Association. Pete, an enthusiast of all things transportation related, had his private pilot license, enjoyed assisting in the restoration of the Nickel Plate Road 587 steam locomotive with the Indiana Transportation Museum, and was his happiest behind the wheel of any automobile on a sunny day. He also found joy in beach walks with his wife, Sandy, on Ft Myers Beach. His wit, kindness, and generosity will be missed by those of us who were lucky enough to cross his path and sit with him to share a snack and words of “Moff” wisdom. As he would often say, “Wherever you travel, wherever you may go, always remember to conduct yourself with grace and dignity,” and when going to sleep, “think of neat things.” Pete is survived by his wife, Sandra “Sandy” (Ziegler-Kendall) Moffett. They were married on February 19, 1971, in Crawfordsville, IN. Also, surviving are his sons: Shawn P. Kendall, David Moffett; daughters: Colleen A. Corp, Meghan S. Moffett (Don Dziekanowski), Victoria Moffett; daughter-in-law, Nancy Kendall; grandchildren: Kelsey Baker (Max), Courtney Kendall, Michael Kendall, Olivia Corp, Mason Dziekanowski and Corbin Dziekanowski. Also, surviving is his sister-in-law, Mary Warren Moffett, and nephew D. W. Moffett (Kristal). Pete is remembered as a loving husband, father, grandfather, uncle, and friend, who welcomed you with open arms. Pete was preceded in death by his son, Kevin L. Kendall; his brother, Donald Moffett, and nephew, James Moffett. Thank you to the amazing doctors, nurses, and caregivers at Community Hospital and Hoosier Home Health who helped provide care and comfort to Pete. Cremation has been chosen with a Celebration of Life Service and burial to take place at a later date. Memorial contributions may be made to the Anderson Christian Center, Wabash College, Dove Harbor, American Foundation for Suicide Prevention, or the donor’s favorite charity. Loose Funeral Homes and Crematory is blessed to be entrusted with the services of Mr. Moffett. www.loosecares.com

The family of Warren Cottrell "Pete" Moffett created this Life Tributes page to make it easy to share your memories.

Send flowers to the Moffett family.